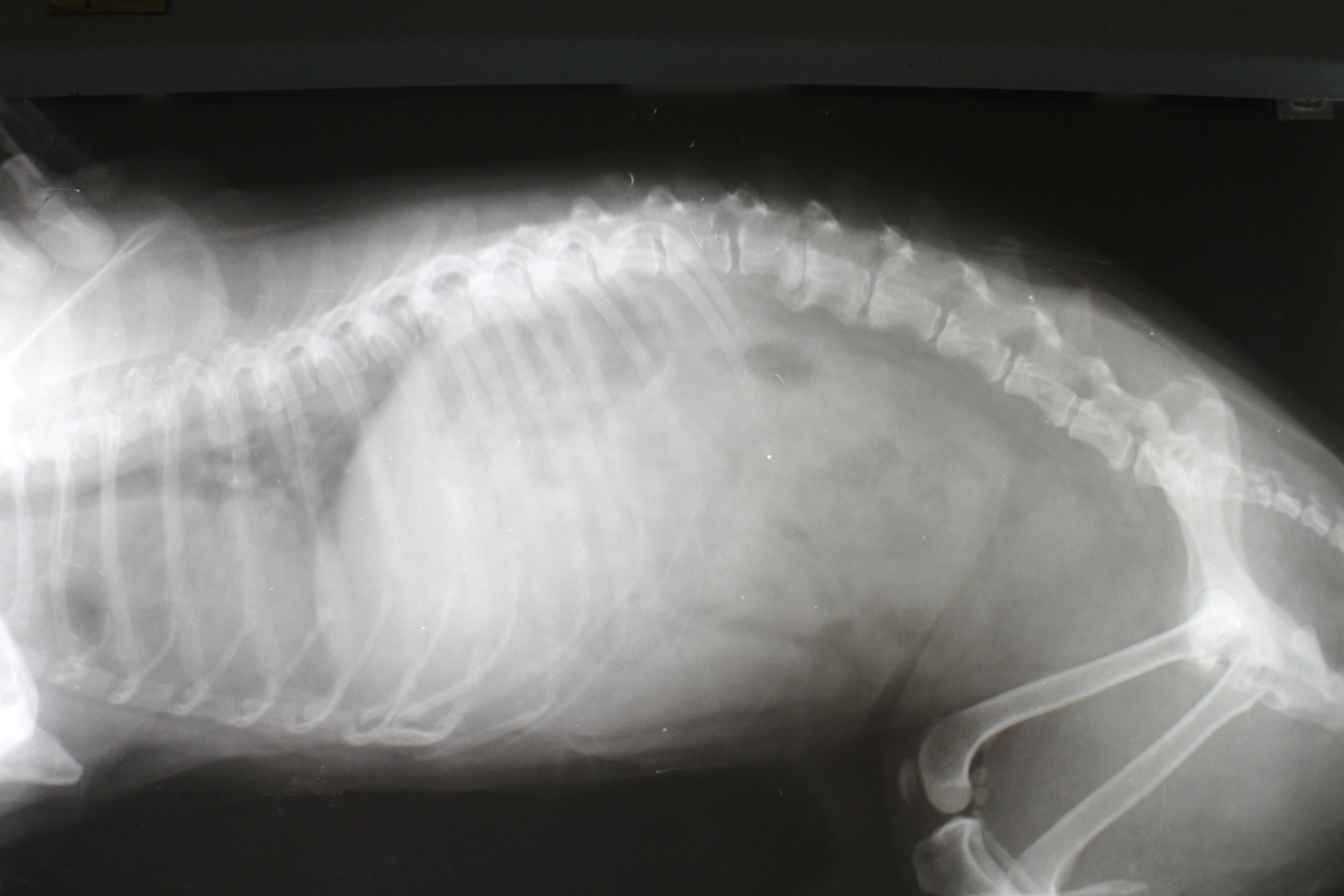 Lab tests have shown that an injection of a liquid polymer known as polyethylene glycol (PEG), if administered within 72 hours of serious spinal injury, can prevent most dogs from suffering permanent spinal damage. Even when the spine is initially damaged to the point of paralysis, the PEG solution prevents the nerve cells from rupturing irrevocably, enabling them to heal themselves.

“Nearly 75 percent of the dogs we treated with PEG were able to resume a normal life,” said Richard Borgens, director of the Center for Paralysis Research in Purdue’s School of Veterinary Medicine. “Some healed so well that they could go on as though nothing had happened.”

The research, performed at Purdue, Indiana University-Purdue University Indianapolis, and Texas A&M University, appears in the December issue of the Journal of Neurotrauma.

In the study, 19 paraplegic dogs between 2 and 8 years of age were treated with a PEG injection within 72 hours of their injury as an addition to the standard veterinary therapy for spinal injury. This standard treatment includes injection of steroids, physical rehabilitation with swimming, and surgical removal of any offending chips of bone remaining in the spinal area after injury. This group of 19 was compared with a second group of 24 dogs that received only the standard treatment.

“The control group was taken from historical cases of dog injury that were similar to those in the 19 dogs we treated,” Borgens said. “We didn’t want to tell any owners who walked in with injured dogs that their pets were not going to receive something that might help. So we looked at the results that the standard treatment had on dogs that had suffered similar injuries in the past.”

After treatment, the dogs’ improvement was measured based on criteria including desire to move, deep and superficial pain perception, and transmission of electrical impulses through the nerve tissue.

“More than half of the dogs in this study were standing or walking within two weeks of treatment,” Borgens said. “In most cases, you could usually notice positive signs within three to five days.”

Another 16 dogs were injected with a different substance called P-188, a mixture of 80 percent PEG along with other chemicals, which also was thought to have potential as a treatment.

“However, dogs treated with the P-188 mixture did not perform as well as those treated with PEG,” Borgens said.

Trauma to nerve cells causes their membranes to weaken and even rupture. Though the cells may survive, this membrane damage causes them to lose the ability to produce and carry nerve impulses along their membranes from one cell to the next.

“Worse yet, chemicals seeping out of the dying spinal cord cells send a ‘suicide signal’ to other nearby cells, causing a chain reaction that kills off more cells than the initial injury did,” Borgens said. “Until now, the end result has been irreparable damage to the spinal cord, causing partial or complete paralysis to the victim.”

PEG is able to intervene in this process by repairing the initial membrane damage. It has been known for decades that two cells that touch each other can become one big cell if PEG is added to the fluid they live in. Because of this surprising ability, PEG is sometimes called a “fusogen.”

About five years ago, Borgens and his partner, Riyi Shi, found that they could actually fuse hundreds to thousands of severed nerve fibers of the guinea pig spinal cord with only a two-minute PEG treatment. This observation led to developing the polymer as a repair agent that would mend the broken membranes of nerve cells after traumatic injury.

Though PEG’s action as a fusogen has been known prior to their work, the exact mechanism that occurs at the membrane to fuse or mend it is still poorly understood. Borgens said that many membrane specialists believe it has much to do with the ability of PEG to quickly and dramatically remove water from the cell membrane that floods into the cell after suffering damage. This makes it difficult for the cellular membrane to heal on its own.

“Imagine children blowing bubbles with wands, the kind with a small round hole at the end,” Borgens said. “The polymer acts like a soap film that covers the hole and draws the water away. In the PEG-sealed membrane, the fatty oils that form the center of the membrane can mix again, free of the water that had likely repelled them. Once PEG dissolves away from the area, water molecules once again help to induce and preserve the restructured membrane.”

In spite of the fact that the exact mechanism is yet to be completely understood, Borgens said it is known that PEG has been both injected and ingested by humans as a component of other medicines and is completely safe. Curiously, PEG only covers damaged cells and tissues when injected into the blood stream and is not found in healthy or undamaged tissues nearby. These facts paved the way for clinical testing on paraplegic dogs at Purdue’s School of Veterinary Medicine by Dr. Peter Laverty and his colleagues, and on paralyzed dogs at a partner institution, the Texas A&M College of Veterinary Medicine, by neurologists Joan Coates and Robert Bergman. These efforts could mean relief for many dogs that are prone to spinal injury.

“Certain dog breeds can easily injure their backs simply by jumping off a couch,” Borgens said. “Up to this point, little could be done for dogs or humans with such injuries – even with immediate attention and the highest standard of care. Decompression surgery and injections of steroids, like methyl prednisone, have done little.”

However, with Borgens’ and Shi’s discovery of PEG’s effects on crushed spinal cord tissue, a new and safe therapy may be even closer to human trials since naturally injured dogs responded so well to it.

“In most dogs, we found a PEG injection within 36 hours can restore sensitivity and even mobility within three weeks,” Borgens said. “These results are unprecedented in paralysis research.”

While such news should be inspiring for pet owners, Borgens strongly cautions those who think a cure for human paralysis is right around the corner.

“There are significant differences between canine and human spinal cords that must be addressed before this treatment can be applied to people,” Borgens said. “In dogs, for example, some of the control of walking actually takes place in the spine, while in humans all of this control resides in our brains. Additionally, PEG cannot just be used off the shelf – it must have a high level of purity for it to be effective. This is very promising research, but it won’t be available in your hospital for some time.”

On the other hand, once these issues are ironed out, Borgens said the next step would be human trials.

“We do not anticipate this treatment to have any significant effect on people who have suffered from spinal injuries in the past,” he said. “But once it is refined, we hope it will prevent future spinal injuries from paralyzing victims permanently. I would like a supply of PEG to become standard on every ambulance.”

Funding for this research has been provided by grants from the National Institutes of Health, the state of Indiana and the Mari Hulman-George Endowment.

Purdue’s Center for Paralysis Research was established in 1987 to both develop and test promising methods of treatment for spinal cord injuries.

In addition to work with PEG, the center has a number of other ongoing research projects. Borgens also oversees work with oscillating field stimulators, devices that stimulate growth of spinal cord tissue by means of electrical fields. The center also is working with another druglike ingested substance called 4-aminopyridine, which has shown potential in reversing the injury-induced loss of nerve potentials in damaged nerve fibers.